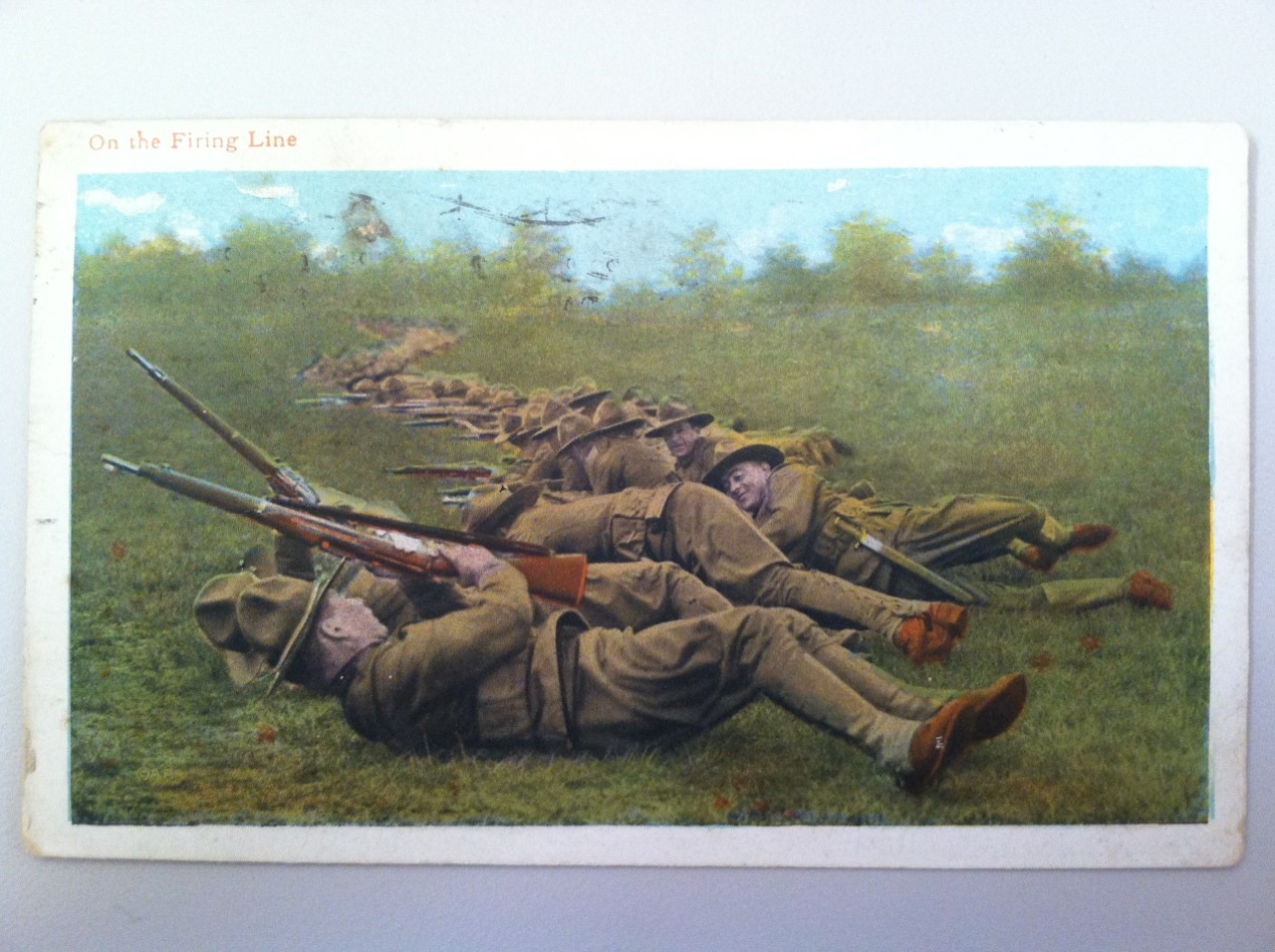 After agonizing weeks of waiting, we finally made it to the Central Rappahannock Heritage Center! All four of us made it, and we found some excellent resources–as we had hoped we would. We looked through many items, some of them useful, and some of them not. We started with Battlefield yearbooks, because they were the easiest items for the volunteers to pull. The CRHC has a very strict policy about copies and photos, but luckily the Battlefield yearbooks are digitized and available on the Internet Archive. The yearbooks had cool tidbits of information here and there that we can hopefully incorporate into the project about the homefront experience, and the ones before US entry into the war give us a good picture of how SNS was relatively unaffected by the war until 1917. I got to look through the 1915 Battlefield yearbook, and the Alumnae Pages had an interesting (and amusing) quote from an SNS graduate, Kathleen White: “She is much excited over the European War, and being a patriotic Canadian, she expresses a desire to enlist if worst comes to worst.”

Candice got to look at some postcards, and one of them is amazing! It depicts soldiers lying on the ground, holding their weapons and says “On The Firing Line.”  It is from a man named Emmett to his Grandma. He writes: “Dear Grandma. Am at Fort Oglethorpe, Ga. Saw Dr. Pratt today. I don’t know where I’ll go from here. Love to all. Emmett.”

Candice also went through a collection of items from the Knox family and put together an awesome Google doc for us with lots of information about them! It contained personal letters, newspaper articles, a family history, photographs, recipes, and more. Another item that we were looking forward to getting our hands on was the homefront diary of Mary Eastburn–Jack got to look at these diaries and they are absolutely amazing! They are an excellent source of information about the homefront, like prices for goods and material shortages. We definitely want to construct a homefront timeline, and these diaries will most likely form the crux of it. Jack has already set to work entering the information into the Timeline tool that we learned about earlier this week. I’m so excited to see how everything turns out in the end! We would like to get digital images of the diary, but unfortunately that will have to wait for a little while, due to the CRHC’s policies and the expense of actually getting the digital images ($2.00 per image). Candice and I looked through several letters from the Stearns sisters, but they didn’t seem to be relevant to WWI. They made no mention of the war, but it is possible that other letters in the collection do–the collection is quite large and has not been cataloged yet. However, unless we end up with ample amounts of time to go through this collection, it doesn’t seem like the letters will be useful to us.

The last item I looked at before I left the CRHC was a book of minutes from the Mary Washington Hospital Association. It ran from 1913 to 1919, so I actually started at the back of the book first, thinking that I would come across mentions of the war sooner from that direction. The January 21, 1919 entry mentioned Liberty Bonds that the association purchased, and several entries from 1918 mention the “question of coal,” which may have been related to war shortages. Interestingly enough, the books of minutes skips almost an entire year–it goes from October 6, 1918 to October 15, 1919. This jump in time startled me, especially because the fall of 1918 was when the influenza epidemic hit Fredericksburg in full force, so I was expecting to find some entries making mention of the virus. It is a very conspicuous absence of information, and Jack and I are wondering if the association kept a separate book of minutes during the time period that is missing. We shall see! We didn’t finish looking through the book, so when we return to the CRHC I would like to skim over the rest of it.

I’m very pleased with our progress and really looking forward to seeing what more we can find!

Interesting Finds in the Archives:
“The time has come” the Walrus said, “to talk of many things.” (1915 Battlefield Yearbook)
A woman at the Mary Washington Hospital caused a large controversy when she gave birth to a child and then put it into the hospital’s furnace, unbeknownst to hospital staff.

One thought on “Storming the Archives”